Accosted in an alley upon leaving the office late last night your writer was set upon by a masked hoodlum, clearly bent upon harm.  “Why no American Follies???”, she said breathily. “You talk about Follies as if we haven’t one or two here.  Domus Americanus?  You are nothing more than Europeans Stupidious.  Do something about that, or else…”

Pinned to the wall as a I was by the brute with a manolo blahnik heel on my toe, the best yours truly could muster was a “Yes Ma’am”.  She seemed familiar but in a flash she turned on her heels and was off.  “I’ll be watching…” she purred over her shoulder and was gone.

So, back to the typewriter way beyond bedtime, scotch at my side to calm nerves, and quickly pecked out an addendum.

Yes, there are many grand follies here in our fair county.  Let us go to the mountain as it were and consider what our first architect blogger did for himself overlooking the Piedmont plain, his sea view as he often called it.  in this folly pavilion within his garden, Jefferson penned thousands of letters explaining his delight in the growing architectural compound he and his team were crafting, influencing his contemporaries and the architectural future of our new nation.

No doubt the well traveled Manigault clan in Charleston, descended from French Huguenots, were up to date on all things architectural and knew well that siren call.   With family members in the vanguard of the American Revolution, when it came to teatime breaks at the Continental Congress, they likely sidled up to TJ and chatted about design trends in their own back yards and shared a laugh over Dunmore’s ridiculous notions regarding pineapples (see our previous post).

Another view of the Manigault’s Garden Folly fronting Ashmead Place. Traditional stucco render on brick completed at the same time the Adam style house was in 1803.  Apologies for the distraction of the lamp post shadow.

Astonishingly robust while simple in detail. 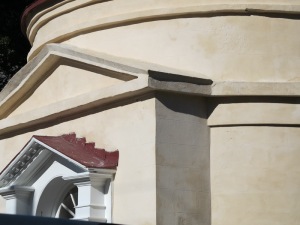 And this view showing the garden arrangement with more of a garden to come later. 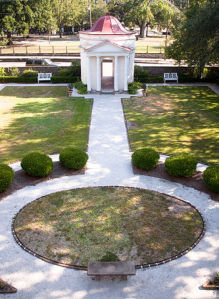 A conversation with Katrina Lawrimore and Jennifer McCormick of the Charleston Museum (founded in 1773 and perhaps this nation’s first museum) led us to this image from their archives.  Talk about the versatility of good architecture! Pressed into service as a gas station it remained grand in every way.  Now restored it is remains a Charleston favorite. 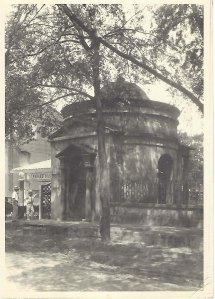 For more information do visit them at http://www.charlestonmuseum.org

Anything older you ask? Well at the Redwood Library and Athenaeum in Newport, this Summerhouse folly was built in 1766 by Peter Harrison for Abraham Redwood.  The structure actually stood on Redwood’s farm in Portsmouth before it was brought over to the Athenaeum grounds in 1916 we believe.  This and the Redwood library itself deserve to be inspected when on any architectural tour in Newport.

Out and about with the Decorative Arts Trust this fall, Ralph Harvard forwarded this image from Natchez.  While a dilapidated lattice folly, do not be put off at first glance.

Everything is in the details.  Few architects could concoct that sort of italianate frieze scrollwork.  The better bet would be that a gifted carpenter in good spirits and feeling frisky was on the loose.

More recent follies? But of course! At Blue Ridge Farm the irrepressible Chuck and Kim Cory rescued an ice house and crafted a porch from which they have a view of fields stretching far and wide. 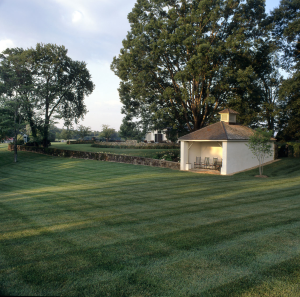 And lastly, our own folly perched at Rabbit Run, resplendent in summer garden finery. 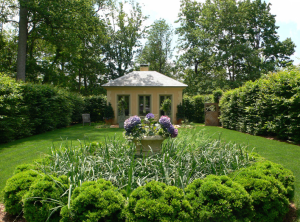 So how does a family of this generation direct folly maintenance without a slew of staff to keep all shipshape and in Bristol fashion?  Why with indentured progeny of course!  And here they are, 1 and 2, in warmer weather prepared to muck out a pond and then off to tin a roof. 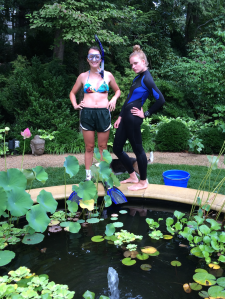 Nonetheless, in weather such as that which graces us today your writer wisely remains inside close to a warm fire with this garrulous beast. 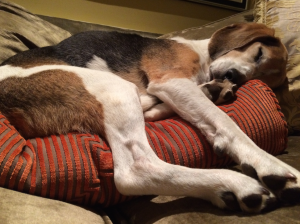 One thought on “Follies Redux”